However, it is usually needed to have an equidistant polynomial of the same order to the given one. For instance, it is essential for the mentioned above application to make the visual system robust and stable. Therefore, an approximate method was developed.

The following simple expressions are useful for the calculations:

Equation of a straight line:

It is needed to flip the reference slope and change its sign to find a perpendicular slope:

The implementation will use Python with Numpy and Matplotlib library for results visualisation.

First of all, points correspond to the given polynomial should be calculated. X coordinates of reference points initialized as equally spaced points between 0 and max_l.

In order to make things simpler with bounds points and better define the slope coefficients we will consider points in between to neighbour pairs of generated ones. They can be obtained by linear interpolation.

One can found out dx and dy:

Here the calculations implemented with respect to desired position (sign of d) of the equidistant and the reference points positions.

As a result, the algorithm is able to produce reasonably well defined equidistant in a simple linear case: 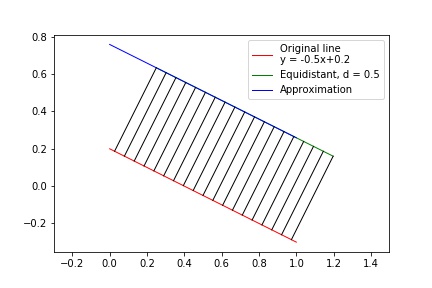 As well as in case of higher order polynomial: 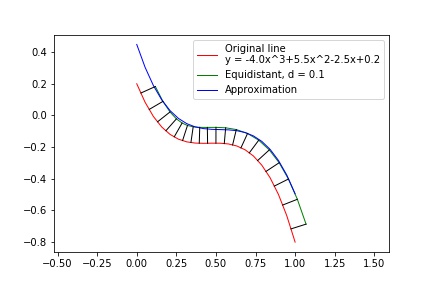 However, in case of real application, one should keep in mind two notes: 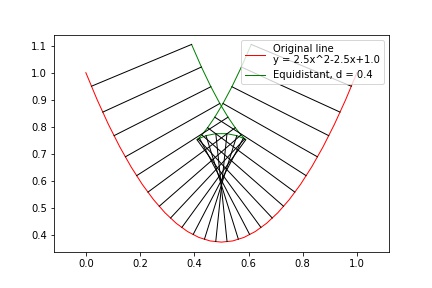 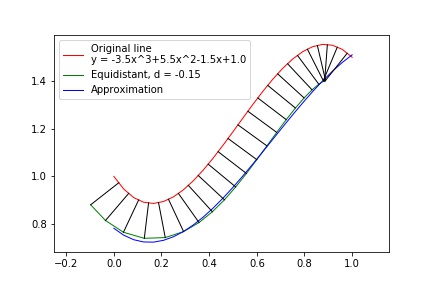 The last issue can be addressed by wise extending x range of the reference points set.

Final code of the project with visualisation.

The code was used in the Lane Lines Detection project.